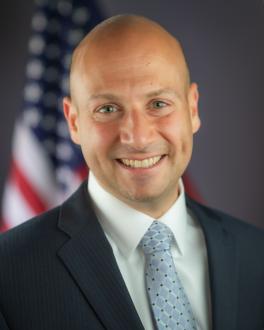 Commissioner Roisman joined the SEC from the U.S. Senate Committee on Banking, Housing, and Urban Affairs, where he served as Chief Counsel. In that role, and as Securities Counsel on the Committee, he advised multiple Committee Chairmen as well as members of the Committee, on securities, financial regulation, and international financial matters. Commissioner Roisman worked on drafting several pieces of legislation that became law and played an integral role in the drafting and negotiation of the Economic Growth, Regulatory Relief, and Consumer Protection Act.

Before working in the Senate, he served as Counsel to SEC Commissioner Daniel M. Gallagher, focusing on enforcement and policy relating to the U.S. equity and fixed income markets, the asset management industry, and international regulation of capital markets. Prior to joining the SEC, he held positions as a Chief Counsel at NYSE Euronext and as an associate at the law firm of Milbank, Tweed, Hadley & McCloy LLP in New York.

Commissioner Roisman earned his bachelor’s degree in History at Cornell University and his juris doctorate at the Boston University School of Law.

Chairman Jay Clayton designated Commissioner Roisman as lead policymaker tasked with considering improvements to the proxy voting process.  He led the agency’s efforts to amend the shareholder proposal rules under section 14a-8 of the Securities Exchange Act of 1934.  Among other things, these rules updated the initial submission criteria and resubmission thresholds that must be met in order for a shareholder proposal to be included in a company’s proxy statement.  The rules aim to facilitate engagement among shareholder-proponents, companies and other shareholders, including preserving the ability of smaller shareholders to access the proxy statements of the companies in which they have demonstrated a continuing interest.

Commissioner Roisman also led the agency’s initiative to modernize the federal proxy solicitation rules (under Exchange Act § 14a-2(b)).  These amendments aim to enable investors who use proxy voting advice to receive more transparent, accurate, and complete information on which to make their voting decisions, without incurring undue costs or delays that could adversely affect the timely provision of proxy voting advice.  Commissioner Roisman also led the Commission in issuing guidance to investment advisers under the Investment Advisers Act of 1940 on how to fulfill their fiduciary duty to clients in the context of proxy voting.  This guidance included considerations for advisers that utilize professional proxy voting advice services, such as recommendations and automated voting features.  Concurrent with the issuance of guidance to investment advisers, the Commission provided an interpretation and related guidance regarding the applicability of the federal proxy rules to proxy voting advice.

Investor protection is central to the SEC’s mission, and with respect to America’s eldest investors, Commissioner Roisman has advocated that their need for protection must be a priority.  He often speaks publicly about the importance of engaging and working with all market participants and the general public to assist in the fight against elder investor fraud.  He has represented the SEC at the Elder Justice Coordinating Council, an interagency task force charged with coordinating the efforts of federal agencies to protect elder Americans.  He stands committed to supporting the SEC’s efforts to work in conjunction with the private sector as well as state and federal regulators and agencies as partners in this fight.

The U.S. Treasury market is the deepest and most liquid market in the world and plays an important role in the global financial system.  Given this market’s importance, Commissioner Roisman has supported the SEC’s active coordination with other federal regulators charged with its oversight.  He has also called for the SEC to consider regulatory enhancements that could improve the Treasury market’s transparency, integrity, and resiliency in light of significant evolutions in Treasury market structure.