Today, the Commission voted on a recommendation from the Division of Corporation Finance to adopt amendments to the accelerated and large accelerated filer definitions in Exchange Act Rule 12b-2.  In simple terms, today’s amendments are a much needed recalibration of three categories of reporting companies—smaller reporting company, accelerated filer and large accelerated filer.  These three categories exist because we recognize that in regulation in general, and in disclosure requirements in particular, one size does not fit all and that we can advance all aspects of our mission through appropriate calibration of our rule sets.

Taking a step back, I note that today’s amendments are part of an ongoing retrospective review of our regulatory framework.  When we modernize our rule sets, individually and collectively, to address current facts and circumstances we have the opportunity to advance all aspects of our mission and, in this case, as in many others, the staff has done just that.

Amendments are Consistent with Effective Congressional Action.  First, in the 2010 Dodd-Frank Wall Street Reform and Consumer Protection Act, Congress determined that the combination of both Section 404(a), the issuer’s requirement to establish and maintain effective internal control over financial reporting (ICFR), and Section 404(b), the requirement to obtain a separate attestation of the ICFR from an outside auditor, was not appropriate for smaller issuers with less than $75 million in public float and exempted those smaller issuers from the Section 404(b) requirement.  In addition, in the 2012 JOBS Act, Congress, on a bipartisan basis, also determined that the combination of both Section 404(a) and Section 404(b) was not appropriate for emerging growth companies (EGCs)—companies with less than $1 billion in annual gross revenues within five years of their initial public offering.  Time has proven Congress was right.  Providing up to a five-year on-ramp that included an exemption from Section 404(b) for EGCs to join the public markets incentivized more companies to join our public markets and provided public market investors with more investment opportunities.  And, importantly, investors have made it clear that this is approach is appropriate.  Not once in my years of involvement in the public offering process—as a practitioner and as a regulator—have I heard an investor say that they would not invest, or would be less likely to invest, because the company qualified as an EGC.  To be clear, today’s amendments do not expand the definition of EGC.  Rather, the amendments we are considering today would only extend the Section 404(b) relief to certain low-revenue smaller issuers, including EGCs that have been public for five years but have not reached $100 million in revenues.  That subset of companies—small, former EGCs—is a particular focus of mine.  I am not persuaded that after five years of public reporting, which includes providing audited financial statements and conducting Section 404(a) reviews, these smaller companies should, in year six, be subject to a new, additional control attestation requirement.

Amendments Reflect Evolution of Financial Reporting and Related Control Systems. Second, ICFR and the interaction between the Section 404(a) and Section 404(b) processes has evolved over time.  In the past two decades, financial reporting, ICFR and the audit process have become more systematized and integrated.  In simple terms, this means that controls are a component of reporting software and systems and the controls assessment (Section 404(a)) aspect of audits focuses on the design and adequacy of those systems.  That is because, at a hands on level, public company reporting processes have changed and improved, particularly for smaller and medium sized companies.

Statistics on the Percentage of Affected Market Capitalization and the Number of Small Issuers Affected Support Conclusion of Appropriate Calibration.  Third, today’s amendments are consistent with Commission and Congressional efforts to ensure that we do not have a one-size-fits-all regulatory structure in our public markets.  At the proposing stage we heard criticism that the amendments reflected a general lightening of our regulation of the “public markets.”  Today’s amendments, while potentially important to each of the smaller issuers (and their shareholders) that will benefit, will not impact the companies that comprise the vast majority of the public markets.  Instead, the amendments focus on smaller, low-revenue companies that make up a very small portion of our public market in terms of overall market capitalization and for whom the cost of unnecessary regulation is most acute.

* Source:  The estimates in this figure are based on DERA staff analysis of annual reports (and the corresponding XBRL filings) on Forms 10-K, 20-F, or 40-F in calendar year 2018; data on revenues (for the prior fiscal year) from XBRL filings, Compustat, and Calcbench; and additional data from Compustat and Audit Analytics. 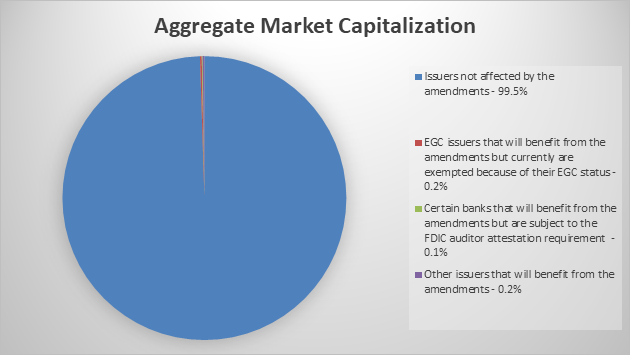 * Source:  The estimates in this figure are based on DERA staff analysis of data on market capitalization from Compustat corresponding to the end of the fiscal year for annual reports in calendar year 2018, with issuers identified as in the previous figure.

Amendments Recognize that There Are Many Components of ICFR.  Finally, going back to my point on never hearing an investor saying something like “I will wait for the five-year EGC period to expire before investing.”  On various occasions, I have asked sophisticated, global investors if they have any hesitation in investing in non-U.S. companies due to the absence of a Section 404(b) auditor attestation.  While there are various reasons to be concerned about the quality of information provided by non-U.S. reporting companies, by and large I have not heard the absence of a Section 404(b) auditor attestation cited as a source of concern.  They do, however, often note a difference in overall control environments.  I believe this is, at least in part, because of the multi-faceted regulatory structure we have established around robust financial statements.[6]  I believe in this control environment and have often commented that the independent audit committee requirement was one of the most effective aspects of Sarbanes-Oxley.[7]  Here, it is worth noting that, smaller issuers that will benefit from today’s amendments will still be required to have their principal executive and financial officers certify that, among other things, they are responsible for establishing and maintaining ICFR and have evaluated and reported on the effectiveness of the company’s disclosure controls and procedures, will continue to be subject to a financial statement audit by an independent auditor who is required to consider ICFR in the performance of that audit and will still be subject to the independent audit committee and other requirements of Sarbanes-Oxley.

I applaud the staff for moving deliberatively and with rigor, with our mission in mind.  I would like to acknowledge the many staff members across many divisions and offices who contributed to this effort:

From the Office of the General Counsel:  Bob Stebbins, Bryant Morris, Dorothy McCuaig, and Shehzad Niazi.

[1] I commend the staff for their thoughtful and robust analysis that is more than sufficient for me to support the recommendation.  I offer the following context for additional perspective and color.

[6] This regulatory structure includes, but is not limited to, independent audit committees, the issuer’s requirement to establish and maintain effective ICFR and the oversight of the audit profession by the Public Company Accounting Oversight Board.