The Securities and Exchange Commission today announced that Mexico-based homebuilding company Desarrolladora Homex S.A.B. de C.V. has agreed to settle charges that it reported fake sales of more than 100,000 homes to boost revenues in its financial statements during a three-year period.

The SEC used satellite imagery to help uncover the accounting scheme and illustrate its allegation that Homex had not even broken ground on many of the homes for which it reported revenues. 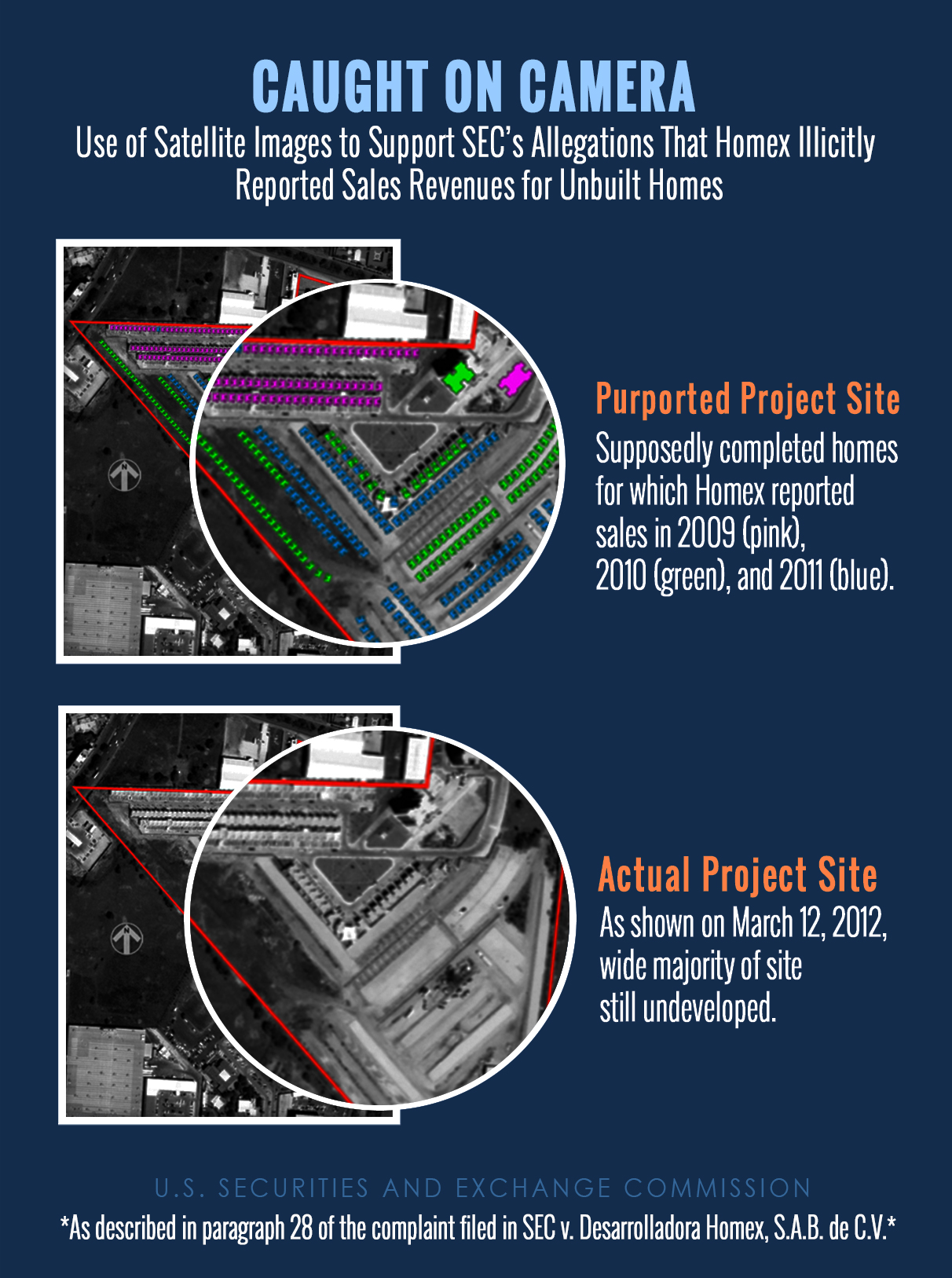 The SEC alleges that Homex, one of the largest homebuilders in Mexico at the time, inflated the number of homes sold during the three-year period by approximately 317 percent and overstated its revenue by 355 percent (approximately $3.3 billion).  The SEC’s complaint highlights, for example, that Homex reported revenues from a project site in the Mexican state of Guanajuato where every planned home was purportedly built and sold by Dec. 31, 2011.  Satellite images of the project site on March 12, 2012, show it was still largely undeveloped and the vast majority of supposedly sold homes remained unbuilt.

According to the SEC’s complaint, Homex filed for the Mexican equivalent of bankruptcy protection in April 2014 and emerged in October 2015 under new equity ownership.  The company’s then-CEO and then-CFO have been placed on unpaid leave since May 2016.  Homex has since undertaken significant remedial efforts and cooperated with the SEC’s investigation.

“As alleged in our complaint, Homex deprived its investors of accurate and reliable financial results by reporting key numbers that were almost completely made up,” said Stephanie Avakian, Acting Director of the SEC’s Enforcement Division.  “The settlement takes into account that the fraud occurred entirely under the watch of prior ownership and management, the company’s new leaders provided critical information regarding the full scope of the fraudulent conduct, and the company continues to significantly cooperate with our ongoing investigation.”

Melissa Hodgman, Associate Director of the SEC’s Enforcement Division, added, “We used high-resolution satellite imagery and other innovative investigative techniques to unearth that tens of thousands of purportedly built-and-sold homes were, in fact, nothing but bare soil.”

The SEC separately issued a trading suspension in the securities of Homex.

Without admitting or denying the allegations in the SEC’s complaint filed in U.S. District Court for the Southern District of California, Homex consented to the entry of a final judgment permanently enjoining the company from violating the antifraud, reporting, and books and records provisions of the federal securities laws, and the company agreed to be prohibited from offering securities in the U.S. markets for at least five years.  The settlement is subject to court approval.