The Securities and Exchange Commission celebrated African American History Month with events in its Regional Offices and a presentation by scholar and award-winning filmmaker Dr. Henry Louis Gates, Jr. to discuss his latest documentary series, “Reconstruction: America After the Civil War,” at the agency’s headquarters in Washington, D.C. This year’s African American History Month theme, “Black Migrations,” focuses on the movement of African Americans throughout the United States from the early 20th century to today.

Hosted by the SEC’s African American Council and the Office of Minority and Women Inclusion, Dr. Gates’ presentation culminated a month of events throughout the agency. Dr. Gates has written a number of books and created documentary films and educational programming, including “The African Americans: Many Rivers to Cross” and the television program, “Finding Your Roots with Henry Louis Gates, Jr.”

In introducing Dr. Gates, Chairman Jay Clayton remarked, “I believe in our quest for a pluralistic and inclusive society where opportunity and support are broadly and fairly distributed and our past failures—particularly in the area of race—are faced head on and provide us with the tools to do better. It is people like Dr. Gates who give us that context and enable us to communicate better, who help us on this journey.”

During a discussion about the importance of expanding economic opportunity for everyone, Dr. Gates noted the larger implications of these efforts, “If people think that they have no hope, then they do hopeless things.” He added, “We have to reshape the economy such that people believe in the future again.” 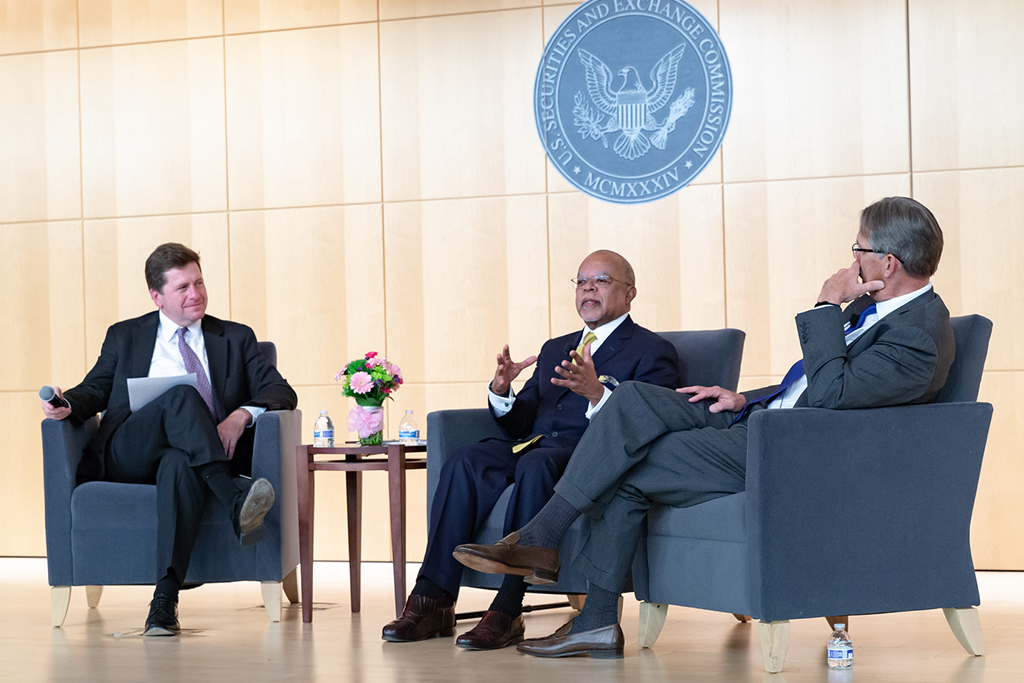 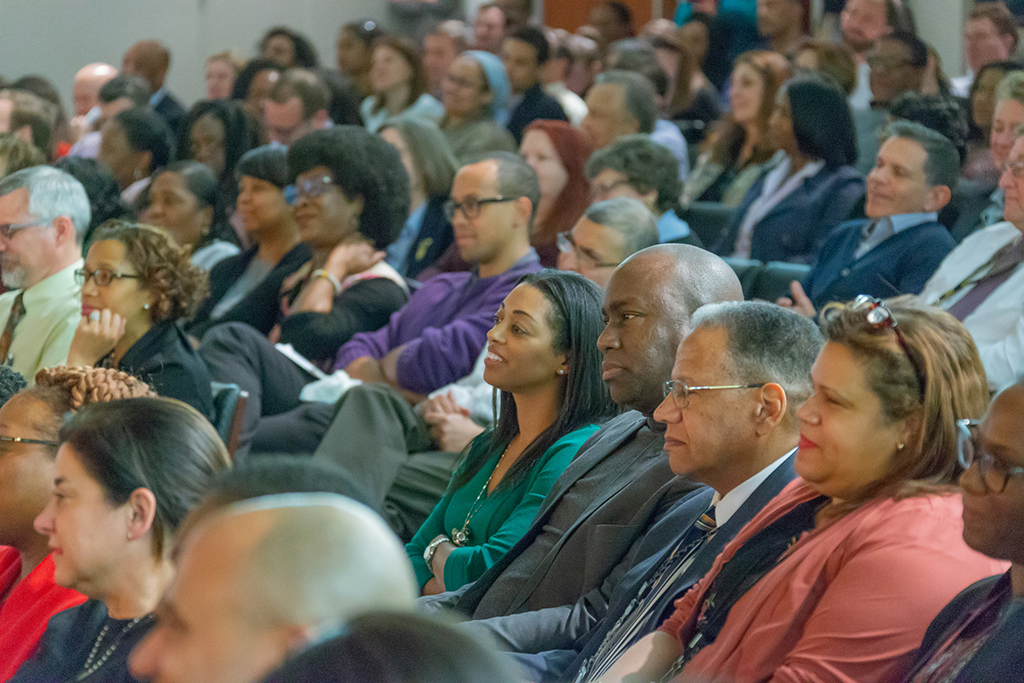 Staff at the SEC’s headquarters in Washington, D.C. watch a presentation by Dr. Henry Louis Gates in honor of African American History Month.

The SEC also celebrated the important contributions of African Americans in law, culture, and history with events at its Regional Offices.

The Atlanta Regional Office hosted Christy Garrison, teacher at Atlanta Metropolitan State College, Samuel T. Livingston, associate professor and director of the African American Studies Program at Morehouse College and Deryl Bailey, professor and admissions coordinator, Department of Counseling and Human Development Services in the University of Georgia’s College of Education for a program about the movements of Americans of African descent to new locations throughout the United States and the new economic and social realities they experienced.

The staff of the Chicago Regional Office heard the fascinating history of gospel music from its beginnings to the present, along with recordings and sung examples, as explained by E. Patrick Johnson, PhD, Chair of the Department of African American Studies and Carlos Montezuma Professor of African American Studies and Performance Studies at Northwestern University.  The presentation included technical descriptions and demonstrations of musical characteristics of gospel music from its origins in nineteenth century hymns of the south through present day.  It explored melodic lines and harmonic structures that are indicative of past and modern day gospel music as well as its influences on modern day blues and jazz.  Dr. Johnson explained the use of syncopated instrumentation to the “worrying” of notes, made famous by gospel greats such as Aretha Franklin, Mahalia Jackson, Shirley Caesar, and the father of gospel music, Mr. Thomas Dorsey.

“Thank you to all who contributed to the SEC’s celebration of African American History Month, particularly those at the African American Council and the Office of Minority and Women Inclusion,” said SEC Chairman Jay Clayton. “On a personal note, it was a great honor to host Dr. Henry Louis Gates Jr. and, in particular, to hear his insight about how our world has been shaped by matters of race and by economic circumstances, and that widely-distributed economic opportunity is important to the betterment of our society. This reminded all of us at the SEC of the significance of our responsibility to America’s investors.” 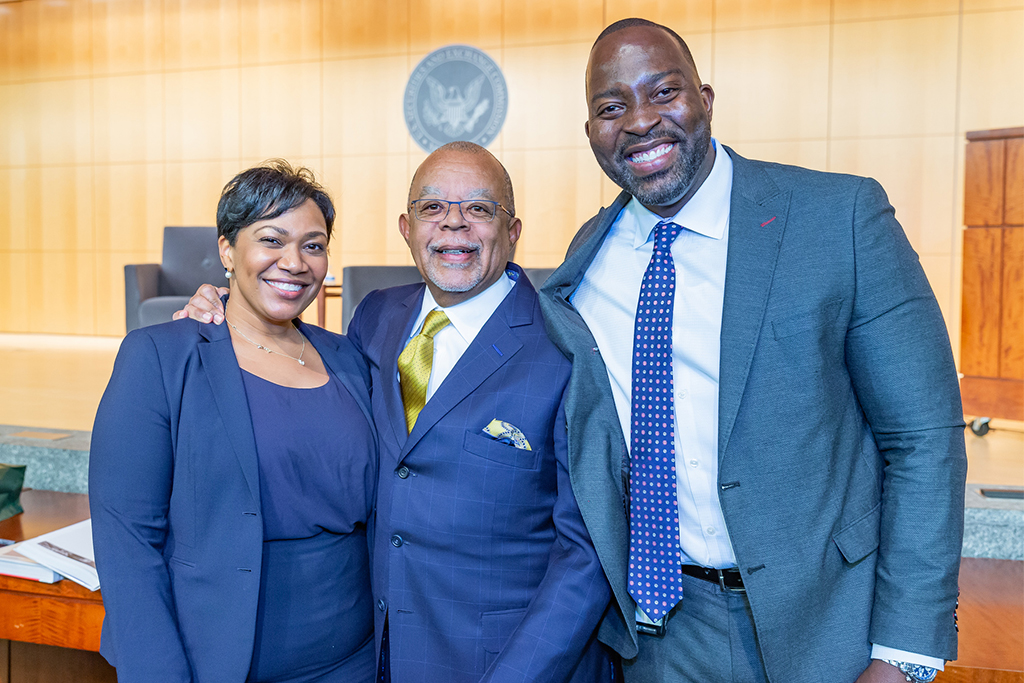 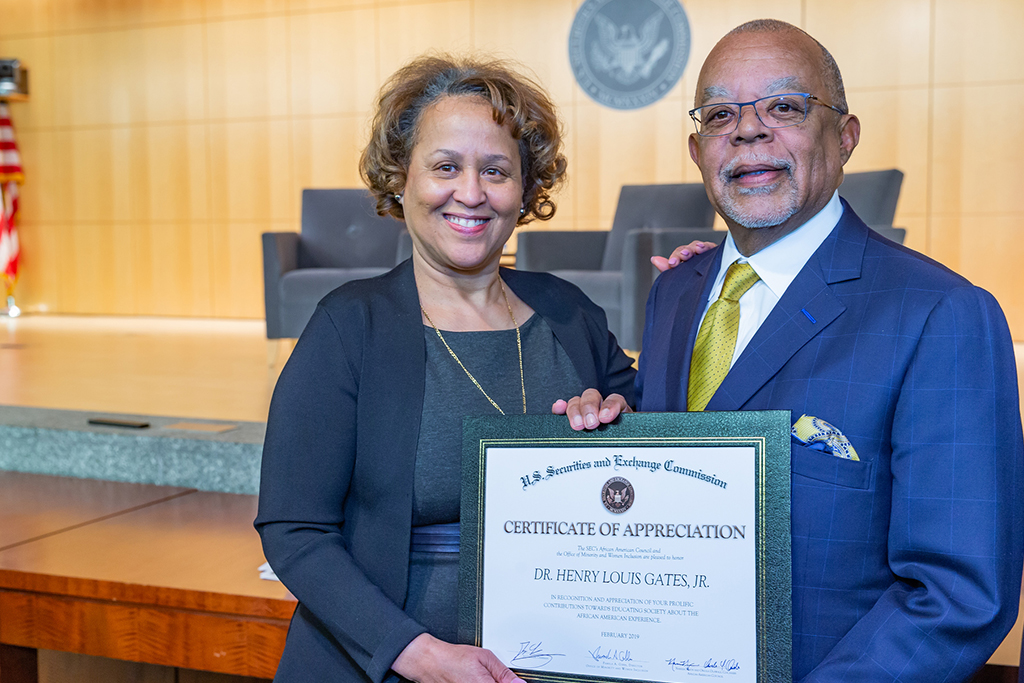 Pam Gibbs, Director of the Office of Minority and Women Inclusion, thanks Dr. Henry Louis Gates for his presentation with a certificate of appreciation from the SEC.