The Securities and Exchange Commission today announced charges against nine defendants for participating in a previously disclosed scheme to hack into the SEC’s EDGAR system and extract nonpublic information to use for illegal trading. The SEC charged a Ukrainian hacker, six individual traders in California, Ukraine, and Russia, and two entities. The hacker and some of the traders were also involved in a similar scheme to hack into newswire services and trade on information that had not yet been released to the public. The SEC charged the hacker and other traders for that conduct in 2015 (see here, here and here).

The SEC’s complaint alleges that after hacking the newswire services, Ukrainian hacker Oleksandr Ieremenko turned his attention to EDGAR and, using deceptive hacking techniques, gained access in 2016. Ieremenko extracted EDGAR files containing nonpublic earnings results. The information was passed to individuals who used it to trade in the narrow window between when the files were extracted from SEC systems and when the companies released the information to the public. In total, the traders traded before at least 157 earnings releases from May to October 2016 and generated at least $4.1 million in illegal profits. 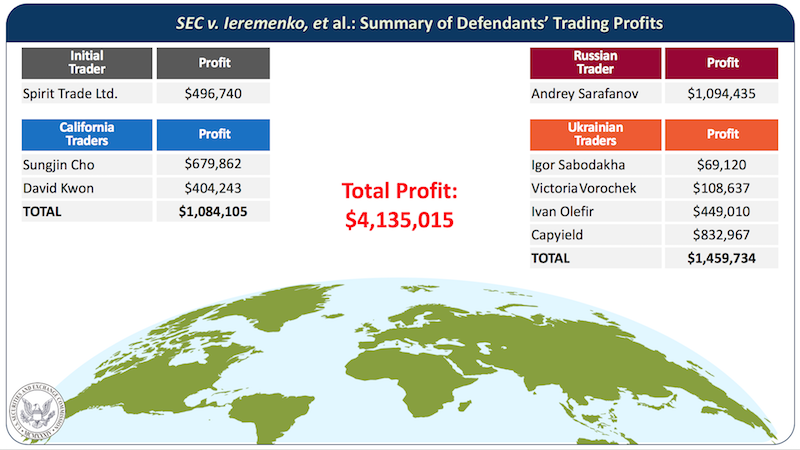 “International computer hacking schemes like the one we charged today pose an ever-present risk to organizations that possess valuable information,” said Enforcement Division Co-Director Stephanie Avakian. “Today’s action shows the SEC’s commitment and ability to unravel these schemes and identify the perpetrators even when they operate from outside our borders.”

“The trader defendants charged today are alleged to have taken multiple steps to conceal their fraud, including using an offshore entity and nominee accounts to place trades,” said Enforcement Division Co-Director Steven Peikin. “Our staff’s sophisticated analysis of the defendants’ trading exposed the common element behind their success, providing overwhelming evidence that each of them traded based on information hacked from EDGAR.”

The SEC’s complaint alleges that Ieremenko circumvented EDGAR controls that require user authentication and then navigated within the EDGAR system. Ieremenko obtained nonpublic “test files,” which issuers can elect to submit in advance of making their official filings to help make sure EDGAR will process the filings as intended. Issuers sometimes elected to include nonpublic information in test filings, such as actual quarterly earnings results not yet released to the public. Ieremenko extracted nonpublic test files from SEC servers, and then passed the information to different groups of traders.

The SEC’s complaint alleges that the following traders received and traded on the basis of the hacked EDGAR information:

In a parallel action, the U.S. Attorney’s Office for the District of New Jersey today announced related criminal charges.