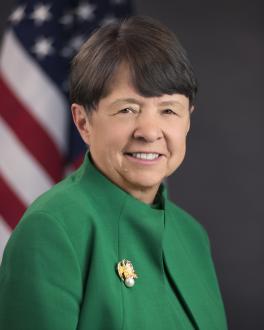 Chair White arrived at the SEC with decades of experience as a federal prosecutor and securities lawyer. As the U.S. Attorney for the Southern District of New York from 1993 to 2002, she specialized in prosecuting complex securities and financial institution frauds and international terrorism cases. Under her leadership, the office earned convictions against the terrorists responsible for the 1993 bombing of the World Trade Center and the bombings of American embassies in Africa. She is the only woman to hold the top position in the 200-year-plus history of that office.

After leaving her U.S. Attorney post, Chair White became chair of the litigation department at Debevoise & Plimpton in New York, where she led a team of more than 200 lawyers. Chair White previously was a litigation partner at the firm from 1983 to 1990 and worked as an associate from 1976 to 1978.

Chair White earned her undergraduate degree, Phi Beta Kappa, from William & Mary in 1970, and her master’s degree in psychology from The New School for Social Research in 1971. She earned her law degree in 1974 at Columbia Law School, where she was an officer of the Law Review. She served as a law clerk to the Honorable Marvin E. Frankel of the U.S. District Court for the Southern District of New York.

Chair White has won numerous awards in recognition of her outstanding work both as a prosecutor and a securities lawyer. The 2012 Chambers USA Women in Law Awards named her Regulatory Lawyer of the Year. Among other honors she has received are the Margaret Brent Women Lawyers of Achievement Award, the George W. Bush Award for Excellence in Counterterrorism, the Sandra Day O’Connor Award for Distinction in Public Service, and the “Women of Power and Influence Award” given by the National Organization for Women.