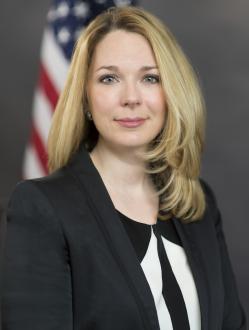 
Vanessa Countryman was named the U.S. Securities and Exchange Commission’s Secretary in June 2019. She previously served as Acting Secretary since March 2019.

Prior to becoming Secretary, Ms. Countryman served as Chief Counsel in the Division of Economic and Risk Analysis (DERA) for five years, where she participated in numerous significant rulemakings, ensuring the effective use of economic analysis across the agency. She has also served as the Division’s Deputy Chief Counsel.

Ms. Countryman joined the SEC in 2010. Until 2012, she was Counsel to then-SEC Commissioners Kathleen Casey and Daniel Gallagher before moving to DERA.

Prior to joining the agency, Ms. Countryman practiced law at Gibson, Dunn & Crutcher LLP, representing clients in regulatory and appellate matters. Following law school, she was a law clerk to the Honorable Emilio M. Garza, United States Circuit Judge, Fifth Circuit. She earned her J.D. from the University of Chicago, and received an M.Phil. from Oxford University, and a B.A. from Columbia University.