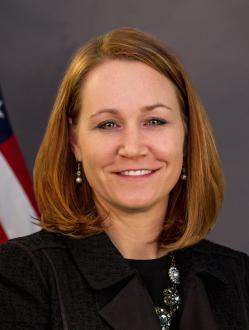 Lacey Dingman was named Director of the Securities and Exchange Commission’s Office of Human Resources in December 2011.

Ms. Dingman previously was Deputy Managing Executive in the SEC’s Division of Enforcement with responsibility for fulfilling the program’s staffing needs and providing advice and assistance on human capital planning and development.

Before coming to the SEC in April 2010, Ms. Dingman was at the Commodity Futures Trading Commission (CFTC), where she started as a forensic investigator and later became a Special Advisor to the Chairman. She was Personal Assistant to the Undersecretary of State from July 2007 to November 2008, when she returned to the CFTC as a business manager.

Ms. Dingman received her bachelor’s degree in business administration from the University of Iowa.