The staff in the Commission’s Division of Economic and Risk Analysis recently assessed the quality of XBRL exhibits submitted by issuers complying with the 2009 rule requirements to file financial statement information in an XBRL format.1 The scope of the assessment included XBRL exhibits submitted from 2009 through October 2013. The purpose of the assessment was to help define a baseline of filer behavior with respect to filers’ tagging of financial statements in their electronic filings, including how their behavior has evolved following the completion of the full phase-in of issuer and rule requirements. One aspect of the assessment, reported below, focused on the use of custom tags2 to describe elements in the financial statements.

Staff observed a steady decline in custom tag use by large accelerated filers during the phase-in period and thereafter. This evidence is consistent with both improvements in the taxonomy over this period and filers’ selections of financial elements. However, staff did not observe this same trend among smaller filers.3 In our sampling,4 smaller filers accounted for 96% of filers with high custom tag rates: defined as those with overall custom tag rates of greater than 50%, i.e., more than 50% of the filer’s line item tags were custom tags created by the filer as opposed to standard tags selected from the XBRL U.S. GAAP taxonomy.5 We believe that the continued high custom tag rates among smaller filers may be, in part, due to continued development and growth in the market for filer software and services, resulting in offerings of varying levels of functionality and ease of use. In particular, many of the smaller filers with high custom tag rates used the same three third-party providers to submit their filings.6

In 2009, the Commission adopted regulations that require companies to submit their financial statements with the Commission using the eXtensible Business Reporting Language (XBRL). The current XBRL U.S. GAAP taxonomy contains thousands of standardized financial elements, or “tags,” from which filers may choose. As the Commission has noted, one of the primary benefits of such a comprehensive taxonomy is that it should lower the time and expense required for market participants to aggregate and analyze the reported data.7 In particular, the common taxonomy should promote the comparability of financial information across companies.8

The rules allow filers to create custom tags when the standard taxonomy does not provide a tag for the necessary financial element. While this customization accommodates unique circumstances in a filer’s particular disclosure, the Commission acknowledged that the use of customized tags could potentially and unnecessarily reduce the comparability of inter-company data, particularly when a suitable standardized tag was otherwise available.9 To lessen this likelihood, the rules specify the limited circumstances under which a filer may create custom tags.10

When the Commission implemented its 2009 Rule, it believed that some filers were better positioned than others based on cost and experience to submit their financial statements in XBRL.11 As a result, the Commission phased in implementation over the course of three years. In the first year, only the largest filers had to comply.12 In the second year, large filers had to comply.13 And in the third year, 2011, the remaining filers had to comply.14 In addition, the Commission did not require detailed tagging of footnotes until each filer’s second year of compliance.15 By phasing in the requirements based on filer size and the level of tagging detail, the Commission believed that both software and third-party services would develop with sufficient time to meet filers’ needs. Moreover, the phase-in for smaller filers during the third year would permit them to learn from the experience of earlier filers.16

In the 2009 Rule, the Commission stated that it would check XBRL exhibits for compliance with technical requirements and to help the Commission identify data that may be problematic.17 The Commission staff has previously reported the recurring issue of excessive creation of custom tags in XBRL exhibits through staff observations posted on the SEC’s website.18 With the rule completely phased-in, Commission staff undertook an effort to assess the quality of XBRL exhibits of filers’ financial statements. Our assessment suggests that not all of the Commission’s expectations have been met, particularly as they relate to smaller filers and their custom tag rates. We believe that this is at least, in part, due to continued development and growth in the market for filer software and services, resulting in offerings of varying functionality and ease of use.

Analyzing the most recent XBRL exhibits as of October 30, 2013, Commission staff identified a sample of filers with custom tag rates greater than 50%.23 Among these, approximately 96% were smaller filers.24 Analyzing the custom tags of larger filers with high custom tag rates in our sample generally revealed an appropriate use of custom tags—there was no systematic evidence of obvious selection error or unjustified use of custom tags.25 In contrast, we observed systematic evidence of smaller filers in our sample creating a custom tag instead of selecting an available standard tag. We also observed that the average use of custom tags in primary financial statements among larger filers has declined in each year since XBRL exhibits were required, while the custom tag rate in primary financial statements among smaller filers has remained relatively flat during the commensurate phase-in period. 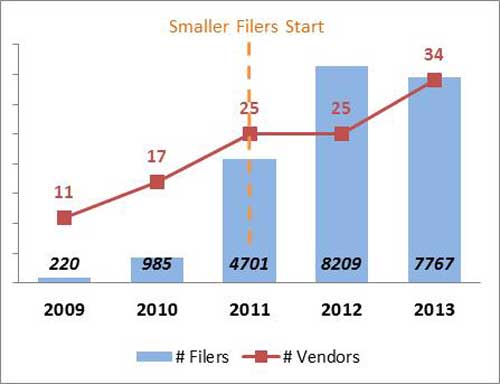 Commission staff intends to continue monitoring the use of custom tags. Depending on the results of this effort, Commission staff may issue further guidance or pursue other action.

[3] For this assessment, we use the term “smaller filers” to refer to filers who use U.S. GAAP but do not meet the definition of “large accelerated filer.” See 2009 Rule at 43; see also id. at 20 n.70 (“Exchange Act Rule 12b—2 [17 CFR 240.12b—2] generally defines ‘large accelerated filer’ as an issuer that has common equity held by unaffiliated persons with a value of at least $700 million, has been subject to the Exchange Act’s periodic reporting requirements for at least 12 months, has filed at least one annual report, and is not eligible to use the disclosure requirements available to smaller reporting companies for its periodic reports.”).

[4] We excluded certain industries which consistently have a higher than average custom tag rate, such as real estate and insurance companies.

[6] Nevertheless, companies who rely on a third-party provider to create their XBRL exhibits are responsible for the exhibits’ accuracy and compliance with the filing requirements.

[9] See id. at 104-05. For example, in the 2009 Rule, we noted that the standard list of tags for U.S. GAAP included the financial statement element “gross profit,” and that an issuer previously reporting “gross margin” should use that standard element, which is definitionally the same, rather than create a custom tag.

[10] See id. See also 17 CFR 232.405(c)(iii)(B) (“An electronic filer must create and use a new special element if and only if an appropriate tag does not exist in the standard list of tags for reasons other than or in addition to an inappropriate standard label.”).

[19] Figure updated on July 28, 2014. Original figure reflected fraction of submissions with at least 25% custom tags on the primary financial statements by year.

[20] 2009 Rule at 39 (“The new rules initially will require interactive data reporting only by domestic and foreign large accelerated filers that prepare their financial statements in accordance with U.S. GAAP and have a worldwide public common equity float above $5 billion as of the end of the second fiscal quarter of their most recently completed fiscal year.”). For this assessment, we use the term “largest filers” to refer to large accelerated filers with over $5 billion in float.

[21] Id. at 43 (“All other U.S. GAAP filers that meet the definition of large accelerated filer will be required to provide their initial interactive data submissions in year two of the phase-in period.”). For this assessment, we use the term “large filers” to refer to large accelerated filers with $5 billion or less in worldwide public common equity float.

[22] Id. (“All remaining U.S. GAAP filers, including smaller reporting companies and companies not previously subject to periodic reporting requirements, will be required to provide their initial interactive data submissions in year three of the phase-in period.”). For this assessment, we use the term “smaller filers” to refer to all filers who did not have to comply with the reporting requirements until year three of the phase-in period.

[23] Our sample of custom tags is of line item tags and excludes tags that are abstract, text-related, member, domain, and document and entity. We also excluded certain industries which consistently have a higher than average custom tag rate, such as real estate and insurance companies.

[24] Our estimates are based on the exhibits and calculations available to us as of the time of our assessment, October 2013.

[25] While not required, filers are encouraged to include detailed definitions for their custom tags. In general, the larger filers used the same wording in their custom definitions as could be found in similar standard tags already in the taxonomy, but modified the text to indicate a material difference from the standard definition. This demonstrates consideration of standard tags and a desire to justify customization.