Tells us about your journey to the SEC

I was fortunate to serve as a Coast Guard officer for 30 years after graduating from the Coast Guard Academy in 1976. I was on a ship for two years and then was a Rescue Coordination Center controller in San Juan, Puerto Rico. My ‘15 minutes of fame’ came from being quoted on the front pages of major newspapers (NY Times, Boston Globe, and in Australia and Germany) after two supertankers collided off Barbados creating a burning oil spill 2 miles wide and 20 miles long which tragically resulted in the deaths of over 15 seamen.

I earned two engineering graduate degrees at MIT, had two commands and was privileged to be the Coast Guard’s 1997 military Excellence in Government Fellow. I retired in 2006 and joined the Homeland Security Institute (HSI) as a Fellow conducting research and analysis for a variety of DHS components including Federal Air Marshals, FEMA, Coast Guard, TSA, Customs and Border Protection and several DHS Directorates.

I realized how much I missed engaging in leadership, especially growing and encouraging leaders, and went back to school and completed my doctoral program (DBA) in 2011 when the SEC started its College of Leadership Development. I applied and was selected for a faculty position teaching and facilitating leadership classes and workshops for SEC University and thoroughly enjoy it! 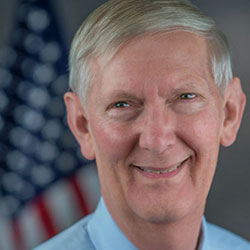