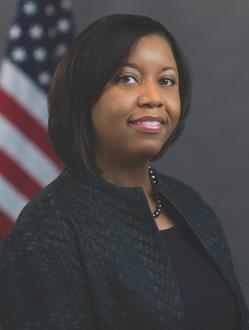 
Tracey L. McNeil is the first Ombudsman for the U.S. Securities and Exchange Commission (SEC), a position she was named to in September 2014. As required under section 4(g)(8) of the Exchange Act, the Ombudsman acts as a liaison in resolving problems that retail investors may have with the Commission or with self-regulatory organizations. The Ombudsman also establishes safeguards to maintain the confidentiality of communications with investors.

From 2011 to 2014, Ms. McNeil served as counsel, then as senior counsel, in the SEC’s Office of Minority and Women Inclusion (OMWI), where she played a key role in advising the OMWI Director on all aspects of the office’s statutory mandate under Section 342 of the Dodd-Frank Act. Ms. McNeil came to the SEC in 2008, where she worked on corporate securities disclosure matters in the Division of Corporation Finance until 2011.

Before joining the SEC staff, Ms. McNeil was an associate on the structured finance team at Hunton & Williams LLP, and counsel in the U.S. Businesses group at MetLife. She began her legal career as a capital markets associate in the New York office of Shearman & Sterling. Ms. McNeil received her B.S. degree from Cornell University and her M.S. degree from Columbia University. She received her J.D. degree from Fordham University School of Law, where she was a Notes and Articles Editor of the Fordham Urban Law Journal and a recipient of the Dean’s Award.