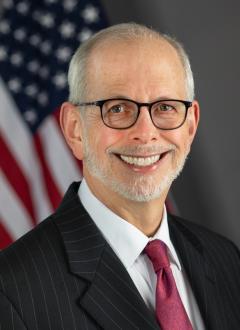 Stephen Deane was the first employee to join the staff of the Investor Advocate and has a wide range of responsibilities. As Engagement Advisor, he serves as the relationship manager for the Office and helps organize outreach initiatives with investors. In addition, he is the office lead on financial reporting, accounting and auditing issues, combatting elderly financial abuse, and working with the SEC Investor Advisory Committee. He also drafts speeches and comment letters.

He received an SEC Exceptional Service Award in June 2019 for his work in helping to spearhead the first-ever town hall for all commissioners outside of Washington, D.C. The town hall was held in Atlanta in June 2018.

Prior to joining the SEC in 2011, Stephen was a company vice president at Institutional Shareholder Services (ISS), RiskMetrics Group and MSCI. He was the founding director of ISS’s Center for Corporate Governance.

Stephen speaks fluent Russian, has worked at the U.S. Embassy in Moscow, and led assistance efforts to develop a market economy in the former Soviet Union at the Center for International Private Enterprise (CIPE). Stephen received a Bachelor’s in Liberal Arts (Great Books Program) from St. John’s College and a Master’s in Russian Studies from Harvard University.